I have so many disconnected thoughts right now.

One is that our path through life is just like that of a quantum particle – we subtly interact with the other versions of our self that ‘might have been’.

Reading Nagarjuna i suddenly get an insight into emptiness as the space between things. but we are always in that space. the things don’t exist.

i’d like to explore more about nagarjuna’s ‘two truths’ (that there are different layers of truth, superficial ‘real world’ truths like gravity and deeper truths that everything is empty like a quantum particle) and compare it to advaita vedanta – does emptiness fit with advaita?

i am also interested in the intergrowth of shaivism and mahayana or tantric buddhism, in java for instance, which some claim is important.

i am thinking of continuing Sanskrit next year – it’s a difficult, rocky path but it’s a kind of tapas for me, perhaps the only real path of tapas i’ve really found in this world. When i was in india recently, i came across an old monier williams dictionary in a small library near the Ramana Ashram. It was one of the good reprints, quite valuable actually, but getting a bit ruined there in the mouldy atmosphere. If i’d have been staying for longer i could have borrowed it and worked on translating the ribhu gita or something like that. But i’m not quite at that level yet – sanskrit texts are still very hard for me to untangle even after four years of study, and my spoken sanskrit is essentially nil. but another year of it could open up some more possibilities and it also gives me access to the anu philosophy department and the interesting work that is ongoing there in buddhist philosophy etc.

Whether i can focus on another year of sanskrit is another question – my brain feels like glue – perhaps some hangover from covid earlier this year or subsequently? I could be imagining it but generally i’m at a loose end right now. I’m sad cause the kids are overseas with their mum in england, an empty christmas break is coming, i’m 44 and my energies are dispursed … life feels it is at a kind of hiatus. I have not lost all inspiration – I did go out and buy a moog, after my Blood moon thinkings, and have been playing that and exploring new soundscapes. It’s interesting how if you just randomly twist the knobs, then most of the noises are kind of unpleasant (even on a moog) but you can find sweet spots, they are like the goldilocks zones of habitability, where we wish our ears to reside. Of course even our ears can get accustomed to new sounds, but there is a pain we need to experience first.

I have seen some great performers recently – i caught Big Thief at their first Sydney show, at the Enmore – they are such a force right now and it was an amazing concert with so many of their greatest songs. I was so happy to finally see them all close up for the first time and feel their energy. Adriane Lenker has such a fragility to her music but on the stage she has this huge muscular power – that’s what i felt about it anyway. And the whole band are so good, i loved watching Buck and his strange gyrations, and the affection that they all have for each other. What a great thing it must be to be in a band like that, riding the wave of an amazing album around the world. I can’t imagine anything more exhilarating nor exhausting.

Then the very next night i was back in Canberra to see the first of two shows with Nick Cave and Warren Ellis – i was with Mel and both nights we ran down to the stage at Nick’s instigation and were up really really close to watch him play. Such a precious bunch of memories, swirling smokes and lights and sheets of lyrics arranged on the piano and bantering among the band. They even performed Henry Lee which coincidentally Mel and I had performed just a couple of months ago at Smiths Alternative – and Nick actually called in a couple of times to Smiths when he was in town and chatted with people we know there about things like his new found fondness for cold water swimming – and it was at their recommendation that he even visited Kambah Pool, a local water hole on the Murrumbidgee. I wonder what that was like as all the rivers are up a bit right now, could have been a few wild currents! But then Nick grew up around Australian rivers.

In farm news, i have now a new dog – this is Wally (Wal – yes that’s a Footrot Flats reference): 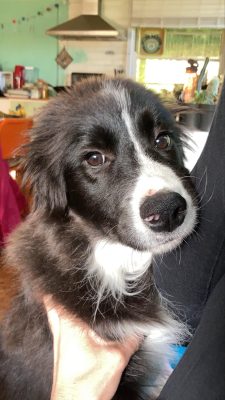 Perhaps despite everything i am growing into the adult that i imagined for myself when i was a kid reading those comics.. living on the farm with a dog and a big garden.. a strange circle i’ve followed as i thought i’d left that life path behind long ago (moving to London, etc).

Wal will keep us company on the farm here with my bees and chickens – yes, a clutch of eggs from the old flock has just hatched in the incubator. Life rolls onward. 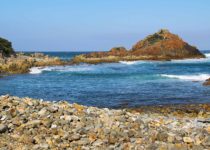