I recently read about an interesting study that found that removing mistletoes from eucalyptus trees actually caused biodiversity to further deteriorate, particularly in the number of insect eating bird species present in the forest. Mistletoe is often considered a sort of pest as it is parasitic to its host tree. Anyone who has spent time in the Australian bush looking up (as I have) will be familiar with the growths, which can be very abundant on some trees. 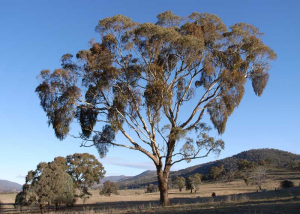 This is a picture of a heavily infested yellow box gum.

How interesting that it turns out such a ‘bad’ species (for the host plant) is actually good for the ecosystem as a whole. I think that the mistletoe is a good metaphor for how simple measurements of productivity can miss the bigger picture. For instance, there is a tendency to abuse bums, wasters and flaneurs, certain artistic temperaments, or those who aren’t engaging with the game, as parasitic to society. We assume that civilisation would be better off without them, but I’d argue that they are like the mistletoes, adding to the variety and richness of life in unexpected ways.