i am all about massaging egos, so i suppose the concept of self reference appeals to me naturally.

Descartes said “Cogito ergo sum” – “I think therefore I am”, which is a sort of self fulfilling prophecy. Douglas Hofstadter’s works on self reference have been influential to me in developing these thoughts (qv Godel Escher Bach). I am also conscious of a statement of Ramana Maharshi on Descartes; that to deduce the existence of “I” from the thought “I think” is like ignoring the elephant as it passes, but inferring it has passed by examining its tracks (A nice Indian tinted metaphor; I can’t find the source right now – it’s probably in Guru Vachaka Kovai).

Putting this together, I think it could be said that “I am” is a self-referential fact – according to Hofstadter, being self referential, it creates itself. It is like a self-supporting structure, a perpetual motion machine, an Escher waterfall. You see, although the finite and logically conditioned world disallows these things, at the root of every finite world, there is one self creating structure. Like the big bang that creates, or like our own sense of “I am” which is self perpetuating.

When something is self referential it does not have to obey any rules of logic or other rules – as it in fact is setting up the rulebook in an image of itself. But to do this it necessarily becomes detached from other systems and may not operate within them.

This is how a finite thing detaches itself from the infinite, which is otherwise an impossible act (as infinity does not allow something to be outside of it). The act of self reference creates a little bubble within infinity, protecting itself. It can then build outward into a world of its own. When I have some proper philosophical training I will be able to discuss this concept more perfectly. 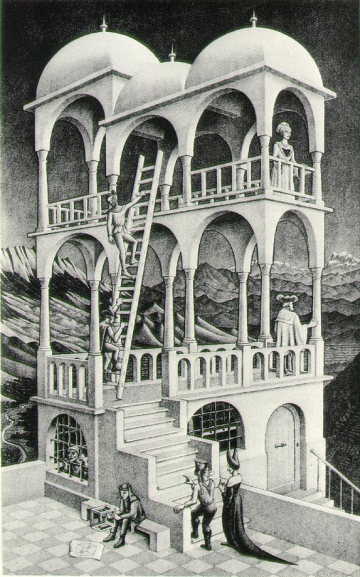 This Escher lithograph is strangely serene, perhaps because it occupies a different kind of universe. Escher informed all my early ideas about reality, and I travelled to south Italy to experience his landscapes in person. It was this sort of scene that took me to Basilicata: 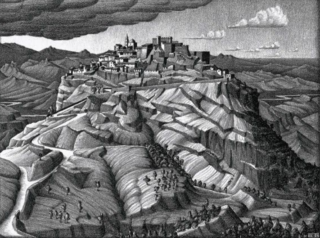 I notice that self reference is the object of several paradoxes, perhaps most excellently, in the liars paradox. “I am a liar” (more explicitly, the statement “everything i say is false”) is self referential, so is it true or false? In fact, according to the self reference rule of creation, by self reference it creates a new pocket of reality, in which in this case “i am a liar” is a self supporting statement, being simply true, and true of everything else in its world (i.e. everything I say is a lie) but not having to refer to itself. This paradox becomes the friction, the fission, at the heart of a new reality which must otherwise contain no logical paradoxes.

“I am” likewise is simply true, and does not have to prove itself. All other things in the reality created by “I am” are supported by that statement (are experienced), but that statement is self-supporting.

Maybe I will have to read more about set theory to be able to explain all this in a fashionable way.