I was lucky enough to hear Bob Brown, former Senator and Leader of the Australian Greens party, speak at the ANU Crawford School yesterday evening. I always admired Bob’s lonely contributions of sanity to parliamentary debates and have always voted Green in past Australian elections. He is an interesting man with a very special story.

Last night I saw some of the fire that must have inspired so many others and got him to such a high position, as he talked passionately about the controversial James Price Point gas hub which will be an environmental disaster if it gets the go ahead from the Labor government this week. The development would send thousands of tankers straight through the middle of the worlds largest humpback whale breeding ground, to facilitate which, a huge channel will be dredged through the pristine coral reefs. The three kilometre long wharf and gasworks will flatten unique remnant rainforest and ancient dinosaur footprints. Some of these individual footprints are 1.7m across. Bob stretched his arms out passionately and his voice wavered as he described these recently discovered prints, made by the largest animal known to have walked the earth. It is such an astoundingly reckless decision by the WA government – although millions of dollars are going to local indigenous communities because of it, which has kept them quiet, this does not counterbalance the irreversible desecration of the landscape and injury to whales and other wildlife in the area. There are other good options such as floating quays or pipelines to existing facilities. I encourage Australians to find out more about this issue and write to their local MP about it urgently – there is also a petition here. A decision is being made this month on whether to do a proper environmental assessment. He also spoke about CoAG reforms which will see the Federal Government hand back environmental powers to the states – where they will more easily be sidelined by commercial considerations. This is a move which undoes 40 years of environmental safeguards put in place originally by Whitlam and preserved by all subsequent federal governments till now. 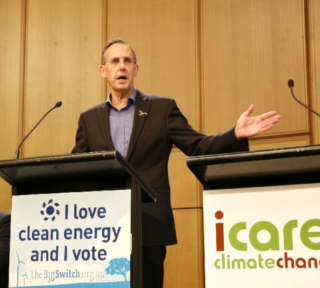 Bob is a showman, in his own rambling sort of way. A highlight of the lecture was when he took a call from Miranda Gibson in her Tasmanian treetop bower 60m above the ground, protesting against the astonishing logging of the tallest flowering trees in the world, and amplified her voice through the auditorium by holding the mobile against his lapel microphone.

His main topic of discussion since escaping from the “Senate cage” as he called it, has been to promote a global democracy. He talks about the current age being one of struggle between Democracy and Plutocracy, and has found that because of these huge corporate interests, there is a everywhere a strong opposition to any talk of global democracy. He has been painted as a lunatic because of it – but poses the question – “what is the alternative?”. Democracy is good for green issues, as the majority of ordinary voters do genuinely care about the environment at some level, it is just the power of big business interests which continually try to railroad through conservation areas. I was interested in whether he has heard about open democracy movements, as I think the two go hand in hand in many respects, and both have the goal of getting true democratic decision making happening and wresting power from the rich, but it turns out he doesn’t use a computer out of principle – although his partner Paul Thomas, told me he recently succumbed to modern pressures and bought an ipad! He bemoans the state of media ownership in Australia, and prefers The Global Mail.

He also had some interesting things to say about depression, that he was depressed for ten years himself, and for him it was experienced as a rational state of despair. He took medication for some of that time. He said this kind of depression is different from a simple chemical imbalance in the brain, but is what can be experienced when one has a true appreciation of the state of the world. But he got over it – “optimism feeds on optimism” he said and quoted Emma Goldman “If I can’t dance, I don’t want to be part of your revolution”. He also quoted himself, saying the choice with green issues, or any strongly felt matter, is always between “democracy or guns” – guns are never the right choice, so democracy it has to be.

The new Bob Brown Foundation has more information about many of these issues. 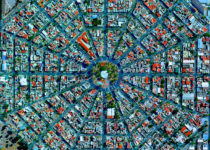