It is acknowledged that time travel is possible – in fact, we are going to need to use these kinds of physics if we are ever going to explore the universe, at least according to the framework of general relativity. But the grandfather paradox appears to make this impossible, or at least very difficult to understand. Essentially, the moment we go back in time and change an event which has a consequence for the moment at which we left to go back in time, we enter some kind of self iterating loop which traps us forever in a state of semi-existence. We are very uncomfortable with this notion, as we are used to living within a solid cause-effect event tree. However, mathematicians are quite comfortable with infinite loops and use them all the time. The question seems to be – how would this feel to a human being? Well, i think i have one possible explanation, which is that it would feel exactly like life already feels today, and that the life we lead is just such an infinite loop.

The moment that one initiated an action which altered the past, we would literally fall into a sea of scenarios all of which could exist as a consequence of that act. It would be like striking a mirror with a hammer, each shard of which reflected a possibility that was created by our act of altering the past. Taking the grandfather paradox as an example, if we really did go back in time and kill our grandfather, then we would create a whole lot of futures in which we didn’t exist. However, these would still be balanced by all the futures which already existed where we didn’t kill our grandfather, plus a whole lot of in-between futures where perhaps we just gave our grandfather a slight flesh wound which didn’t alter our existence quite as much but still had some effect. Obviously, conceptually, we have trouble with all this existing at once. We are used to being a single being existing in a single body at a single point in time. But I argue that this is just a fudge, that we are tied for i suppose cognitive reasons to a single thread of history, but that this does not reflect reality at all. The moment we become disconnected is when we die. We then have a chance to pick up another thread. This would also be initiated by the instant we initiated a travel back in time to alter history, because implicit in that moment would be the possibility of our own ‘death’ or, ceasing to exist.

Hopping from one stream to another would become a familiar action to a time traveller. The concepts of ‘birth’ and ‘death’ would become antiquated. Instead, the full mutability of possible life histories would be our terrain. The concept of ‘me’ would shift each time we leapt from one history to another, as each body we inhabited had sprung from a slightly different seed. We would become an actor in our own life, and in the related lives which became revealed by tinkering with the chains of our own history. 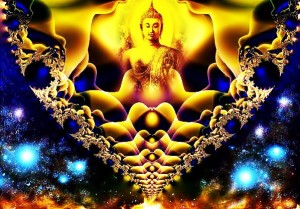 As fantastic as this sounds, it is nothing more than what is happening every day of our lives. Perhaps no ‘time travel’ device demonstrably exists in this current thread of space, in this world. However could our consciousness contain the countless visitations of our own self from other time paths? Passing fleeting visits, leaving the sticky threads of other worlds in our mind – these are our thoughts, our imaginings and our dreams. We exist in a web of time, connected by the very laws of physics with countless others – ‘aliens’ maybe – yet they are as familiar to us as our own face reflected in the mirror, they are intimates to our inner ‘private’ world. Maybe one day we will become time travellers ourselves and we will join them – this will be the next great leap in evolution – when we are freed from this time and space and will have the whole multiverse to explore, and all through familiar eyes.

I suppose these kind of ideas would make me certifiable… but it’s all bread and butter to the poetic humour.