Damien Rice took to the stage in fine form last tuesday night to an audience of loyal fans who had come from far and wide to hear his subtle blend of Irish folk/rock and turtle juice, touched with deeply textured thoughtful guitarwork and maidens singing. The transition from almost silent harmonies of lyric and cello, marked by the quivering of candle flames on stage, to electro fuzz and noise, far too big for this modest sized venue, was carried out time and again to greater and greater effect. Looking like a mischievous leprechaun, with tight curly hair and bright blue-green eyes, Damien established a close intimacy with his listeners that couldn’t be broken. And he was well matched by his singer Lisa Hannegan, whose vocal chords lilt effortlessly high like a dancing seagull. The Cellists notes weaved their way through each song like a dark thread, drawing the diversity of sounds together. Even the drummer was able to adlib a drum solo during a short break using only his lips. It was like crashing into a secret gathering of folk alphabetti. 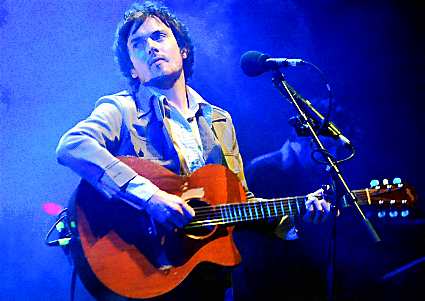 For a someone who still has the freshness of a new performer about him, Damiens songs are amazingly tight. And they climb from one sound to the next without becoming repeditive or over-worked. His debut album ‘O’ released 6 weeks ago in the UK has just gone Platinum in Ireland and he has a growing following here too. Catch him when he plays support for Kathryn Williams this October in the Old Vic.