Hello there. Welcome to Pλosm. 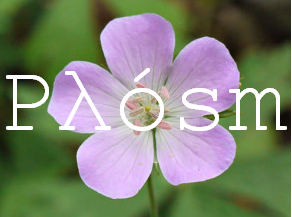 Pλosm is a philosophy that attempts to incorporate unknowable truths without being anti-science. Its symbol is the five petalled flower, which in turn represents the human hand, and the five letters of Pλosm.

P stands for Path, or Pada, through which is found Peace. This is the grounding—for we walk the path with science and muse in balance, that is the path of Pλosm. And the flower of this path is Poetry.

Λ—greek L—stands for Logic or λόγος, which is a kind of word or story or argument. It represents the working of reason through logical argument. It also represents a narrative of a particular reality, which needs language to exist.

O represents Ouroboros, the serpent eating its tail, and the unknowable ‘mu’. And it represents a planetary sphere, for us this is the Earth—Gaia in fact.

S represents Science—scientists strive towards the unknown but keep their feet on the ground of reason. They reveal the laws of the universe.

M represents the Muses, music, movement—all the arts—and the beauty that follows. This is an essential ingredient in any philosophy of living.

All of these things come together within the human being, and bringing these into harmony is the way of Pλosm. Pλosm attempts to unite a scientific or rational view of life with a religious or spiritual one, without being self contradictory—or rather, it embraces the contradictions, which only exist if seen through an particular prism, but vanish when all views are taken as equal.

I am still working out the theology of Pλosm in these pages and in my life. It is a work in progress and I am adding to it and modifying it as inspiration comes to me. The first post is called ‘being sensible‘. Feel free to explore the rest of this site, which covers all sorts of topics, and experiment with the Pλosm life.